Sandra Laemmel organized a party that brought out nearly 750 postal carriers from around the country out for a fun night in Detroit. It raised money to support MDA.

On Tuesday, July 17th, Michigan Avenue hopped with bumping music and people streaming in and out of Nemos Bar and Grille, the legendary landmark bar located just a couple blocks from the sacred ground of Michigan and Trumbull, the old home of Tiger Stadium.

On this night, almost 750 United States Postal  workers from around the country were partying – and raising money for charity – thanks to the tireless work of Sandy.  They were enjoying their time in The D in large part because of her work. 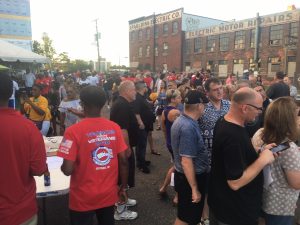 Nearly 750 postal carriers in town from around the country came out on a Tuesday night.

Sandra works for the local Letter Carriers Union, a proud postal worker. For the first time since 1966, the National Association of Letter Carriers is holding their convention this week in Detroit at Cobo Hall. Months ago, Sandra planned to do something special. 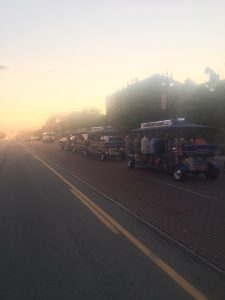 Some of The Michigan Pedaler bikes take out-of-towners attending the National Association of Letter Carriers convention on a ride into the sunset of Michigan Avenue.

With over 7,000 carriers in attendance from all over the country, Sandra wanted to figure out a plan to make sure they would enjoy their time in the Motor City, have something to do, build camaraderie and hopefully, raise some money for the Letter Carrier’s charity, the Muscular Dystrophy Association (MDA).

She came up with a plan to entice her fellow carriers to get together.  For $25, they could come to Nemos for a party, complete with a DJ, enjoy a couple drinks, hot dogs, hamburgers, chips and such. But she knew she wanted to make the party a bit special – and enticing to bring people out.  So she contacted The Michigan Pedaler.

Through brainstorming and suggestions, we spoke numerous times and came up with a plan. We’d ship our entire fleet of Michigan Pedalers up to Nemos for the night and run rides for people from Nemos up Michigan Avenue to the Train Station and back.

People loved the entire party idea and started buying tickets.  What’s not to like than to attend an outdoor party on a Tuesday night?  Sandra hoped  to sell 500 tickets.  A sell-out would equal 750 guests.  With 90 minutes left in the party, she had sold 730 tickets.

Lines formed to ride our bikes.  Sandra had a team of people restocking the coolers on the bike with every dropoff.  Wave after wave, The Michigan Pedaler picked up more out-of-towners, showed them the new sites of Corktown and helped keep the party going on the wide streets of Michigan Avenue.  People posed for a photo at the Train Station – Sandra even had a professional photographer stationed there waiting for them – pedaling and partying  on the bike before heading back for more fun at Nemos. 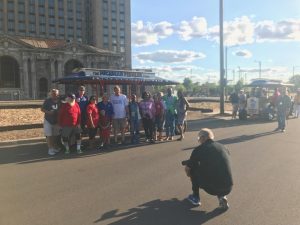 Sandra stationed a professional photographer to catch each group at the Train Station.

With the weather-gods presenting a Chamber of Commerce-worthy sunset and great weather, the crowds danced, played cornhole while soaking in the atmosphere of an old-school Detroit party in the parking lot outside the bar. 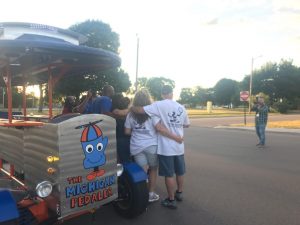 Groups pedaled up Michigan Avenue and took a picture at the Train Station as part of the event.

Meanwhile, Sandra smiled. The night could not have been better. Nearly 750 people visiting Detroit came out for a great time in the heart of our city. Hundreds enjoyed The Michigan Pedaler as part of the experience.

Kudos to Sandra & Her Team

When the numbers are all added up, Sandra expects to raise about $10,000 for MDA.  But she also helped change an attitude about the whole city.

“People said to me that the last time they visited Detroit, they didn’t want to leave their hotel room,” Sandra told me.  “Now look at them.  They are all over the streets.”

She added that people can’t believe how friendly everyone is here in Detroit.

It’s because of people like Sandra that they are —   a true Ambassador to Detroit.

Doing a corporate ride? Partnering with McShane’s helps expand the outing and keep the fun rolling! 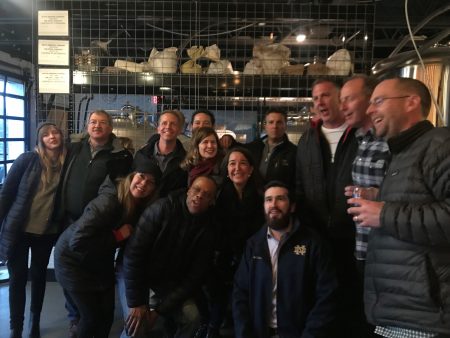